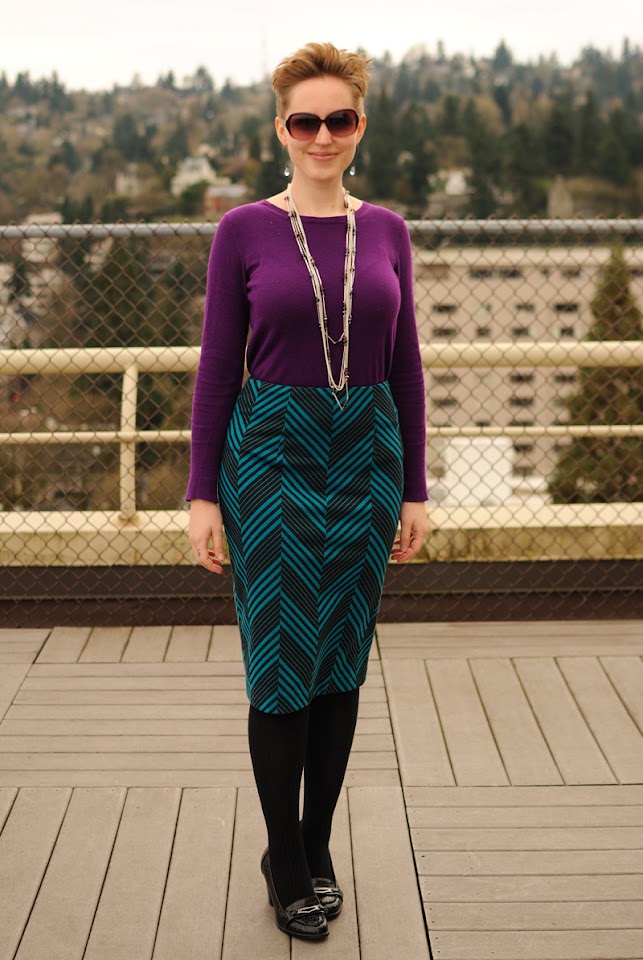 No, your eyes are not deceiving you - I chopped off all my hair! I thought it was finally time to fulfill my dream of looking like Justin Bieber. (I'm kidding - although my hair does kind of look like the Biebster's now.) It's weird and sassy and kind of boyish, but I love it! Plus, it means I can cross #5 off my 30 before 30 list. And it means that doing my hair now takes ten seconds.

I went to Lucas Salon to get it done. I can't say enough good things about that place. Every time I've been there, they've done great things to my hair. If you're ever in the Portland area and in need of a haircut, visit Lucas Salon and ask for Shiloh - she's the one who cut my hair this time, and I loved what she did. 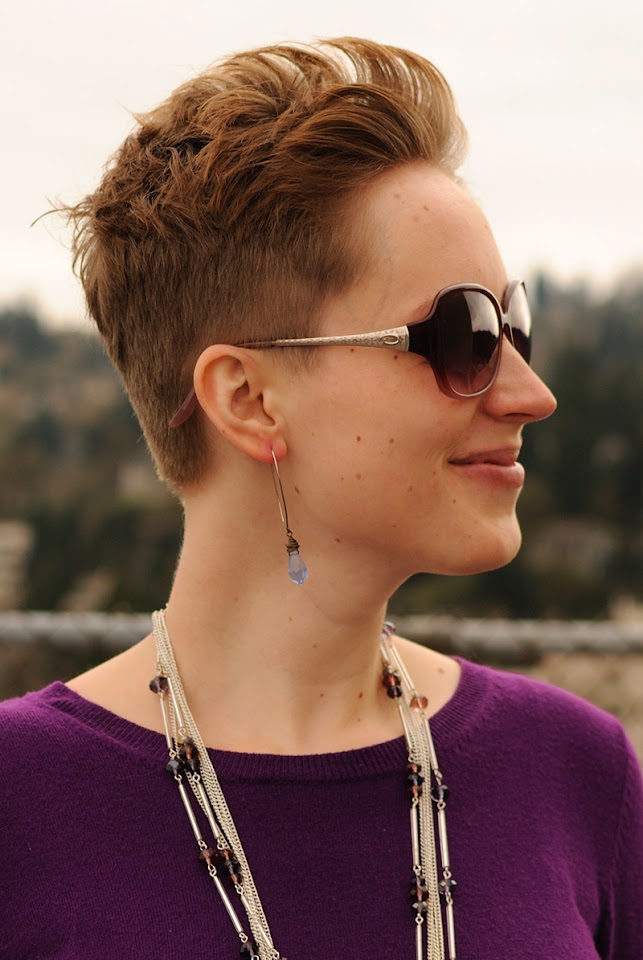 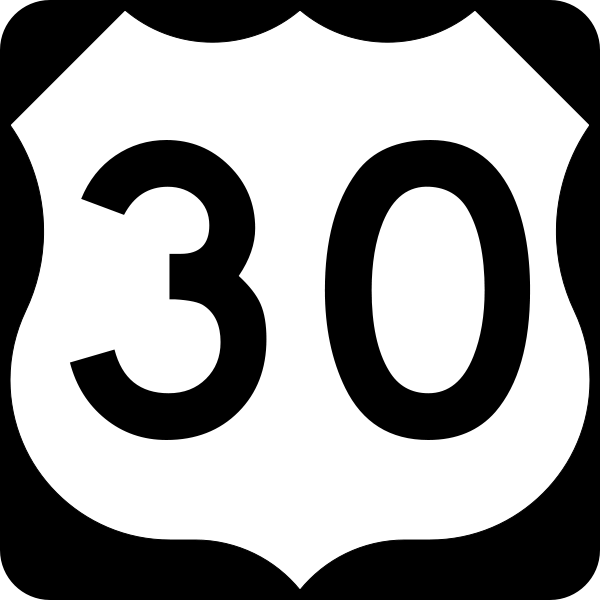 I've seen tons of people make a "30 before 30" list, of 30 things they want to do before they turn 30. Well, since my 30th birthday is in just over a year (I'm trying not to have a panic attack every time I think about that), I decided to make my own list. I'm calling it my "sort of" 30 before 30 list because so far I haven't been able to think of 30 things. It's tough to find a balance between crazy things that are expensive, and fun things that don't cost any money. So as I think of more, I'll add to the list, but I wanted to get it posted today because I just did one of the things on my list, and wanted to talk about it in my next post!

1. Go skydiving.
2. Get another tattoo. I have two already, but there are several more I'd like.
3. Travel somewhere new. It would be too expensive to travel somewhere like Europe, so I'll settle for traveling to a new city in Oregon if that's all I can get.
4. Pay off all debt except student loans.
5. Do something new to my hair (that I've never done before).
6. Get a piece of writing published (or at least try really, really hard).
7. Sew another quilt.
8. Save up six months of expenses. Josh thinks this is overly ambitious, because even six months of limited expenses is a very large sum of money, but I'm feeling optimistic.
9. Learn to crochet.
10. Eat at a food cart. If you live in Portland, you know how crazy it is that I've never actually been to one.
11. Eat at Portland City Grill. It's a restaurant at the top of one of the tallest buildings in the city, and it's normally absurdly expensive, but recently I learned that their happy hour prices are reasonable.
12. Go to a shooting range and learn how to shoot a gun. I'm actually anti-gun and never want to own one, but I still want to learn how to handle one properly.
13. Knit something that isn't a scarf.
14. Take a self-defense class. I'm feisty and I carry mace, but it would still be handy to know some tips for defending myself against an assaulter.
15. Go rock climbing (at a gym).
16. Adopt another dog.
17. Stay a night at McMenamins Edgefield. (I did a post full of photos of it here.)
18. Visit the Portland Art Museum. (Another thing I probably should have done a long time ago.)
19. Make a cake from scratch (icing too) and have it look pretty. I have no problem making delicious desserts - I just have trouble making them look nice.
20. Learn to drive a stick shift. I think this is the goal that makes Josh the happiest, because he's been wanting to own a stick shift for years.
21. Switch to buying all organic milk in glass jars. I know this one sounds all hippy-dippy - but I am kind of a hippy!

If any of you have suggestions for 9 more things to add to my list, let me know!
7 comments:

Email ThisBlogThis!Share to TwitterShare to FacebookShare to Pinterest
Labels: 30 before 30 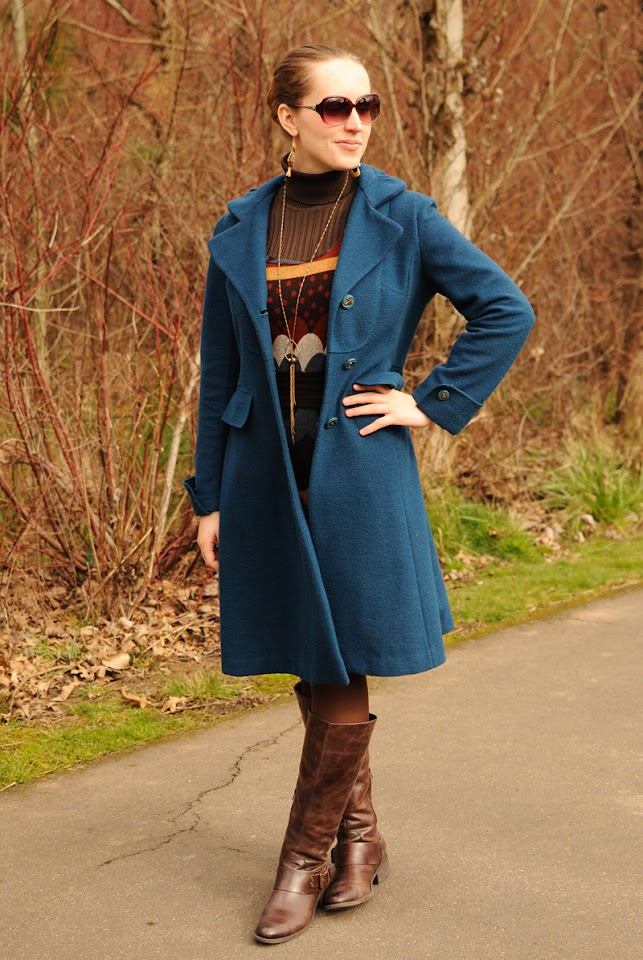 The last time I wore this dress was more than a year ago (here). I know people always say that you should have a closet full of clothes you wear all the time, but I think there's something fun about having a lot of dresses that I only wear a few times a year. Maybe it has something to do with the fact that I'm easily bored - if I only had five dresses, I'd hate them all pretty quickly. Instead, I have about thirty, and still feel pretty excited to wear all of them. 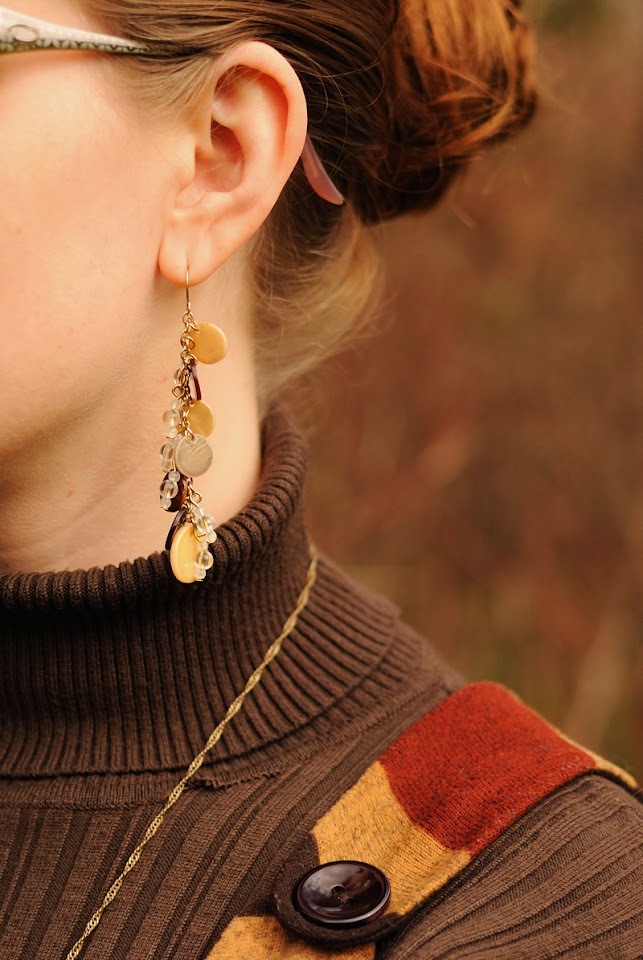 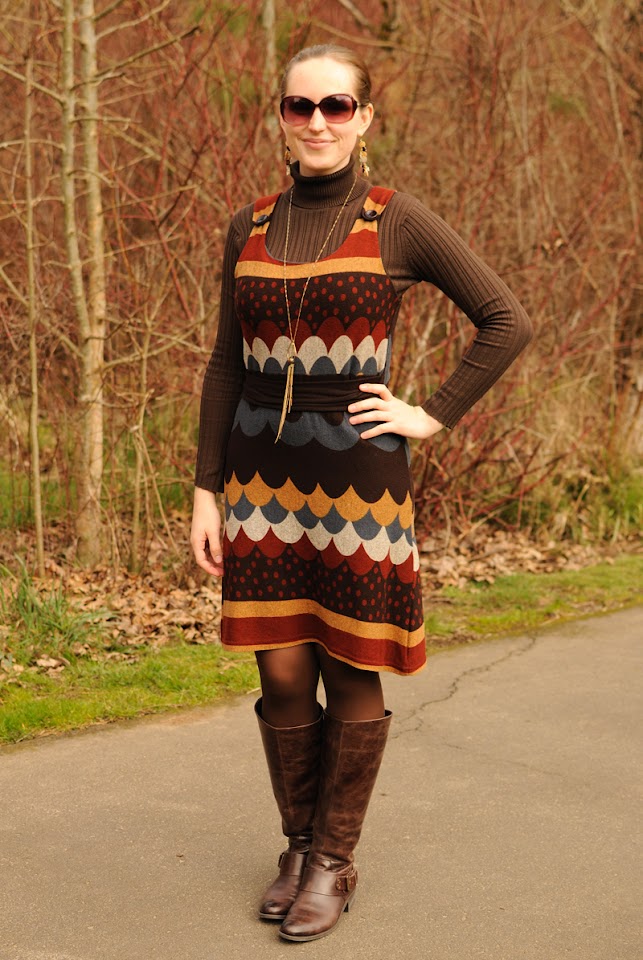 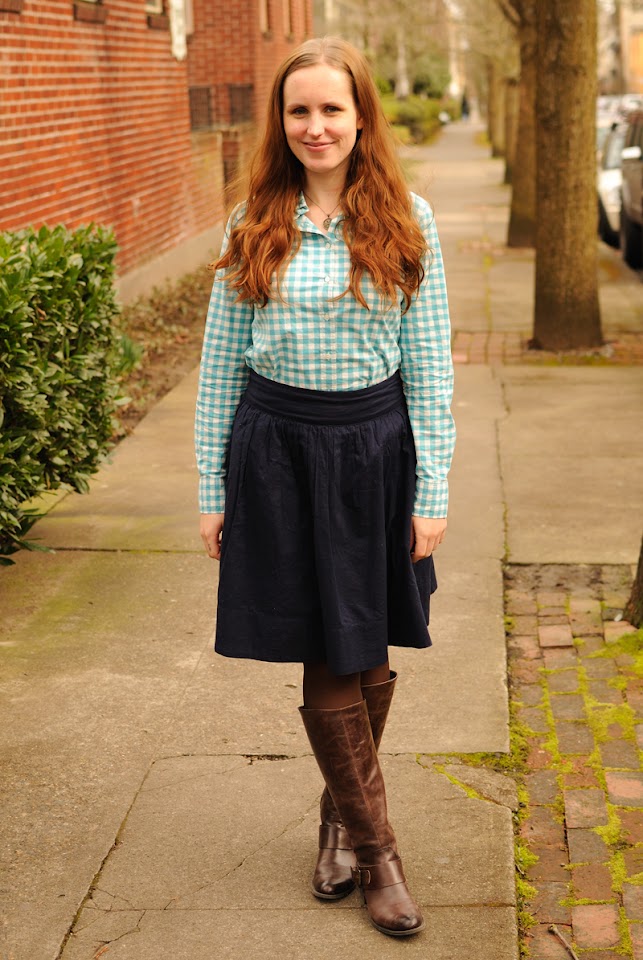 Here's a "plain Jane" outfit from the other day. Apart from the wrinkly skirt, I thought it was cute, even if it was a bit simple. During the afternoon that I wore this outfit, while I was snacking on some popcorn, part of one of my teeth broke off. Ahhhh! It was a horrifying experience, to pull a chunk of broken tooth out of my mouth. But thankfully I got it fixed yesterday, and I think I'll steer clear of popcorn for a while.

Also - where the heck did my eyebrows go?! I wish they would show up in photos more often... 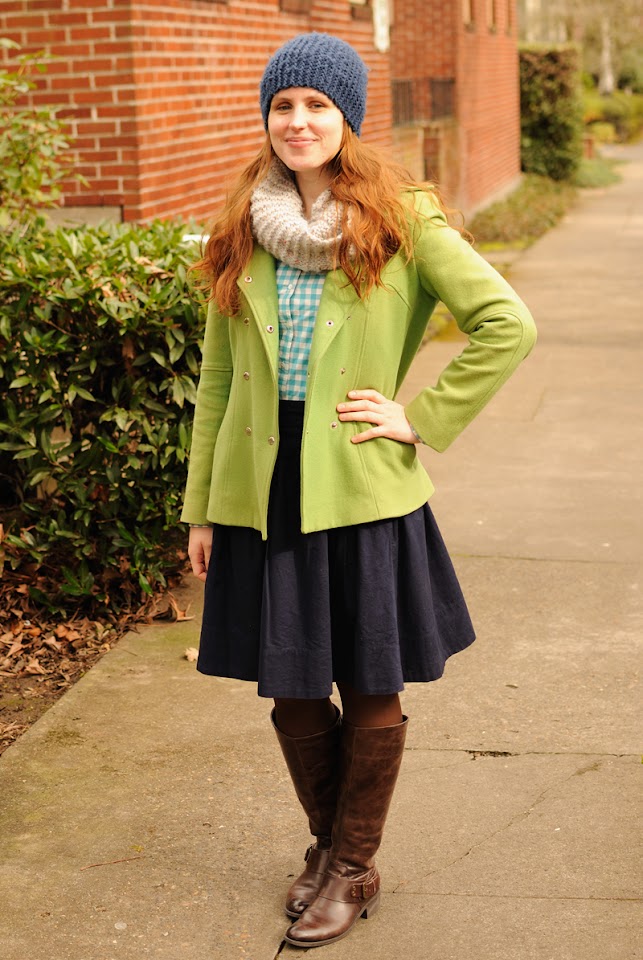 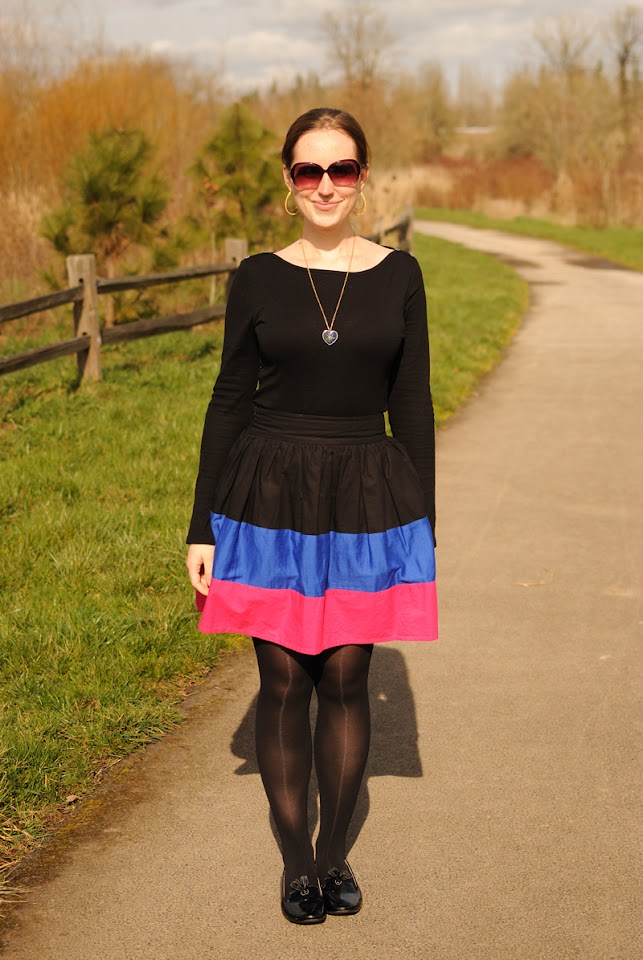 I'm so tired of buying black tights and having them disappoint me. Both pairs of black tights I bought at American Apparel ripped (one pair ripped the first day I wore it!), and this pair from Target that I'm wearing in these photos appear to have bald patches. (And you thought the title of this post was referring to my hair, didn't you?) I just want a pair of solid black tights that have an even tone and don't rip the moment I put them on - is that too much to ask of life?

Other than the tights issue, I loved this outfit. I'm glad I found an excuse to wear my giant fuzzy black hat in a way that doesn't make me look totally insane. (Unless it does, in which case I guess I'm not very self-aware.) 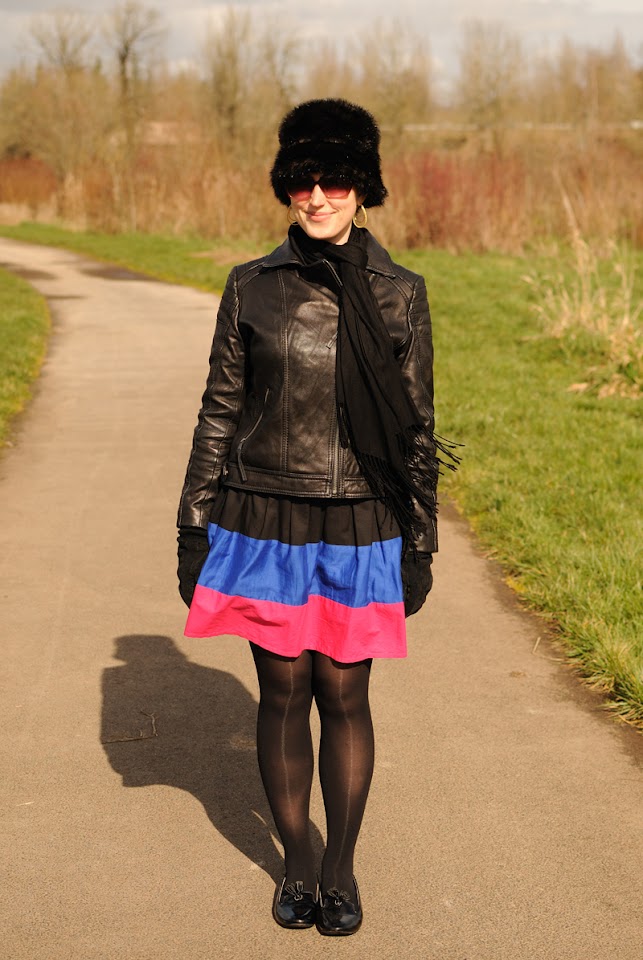 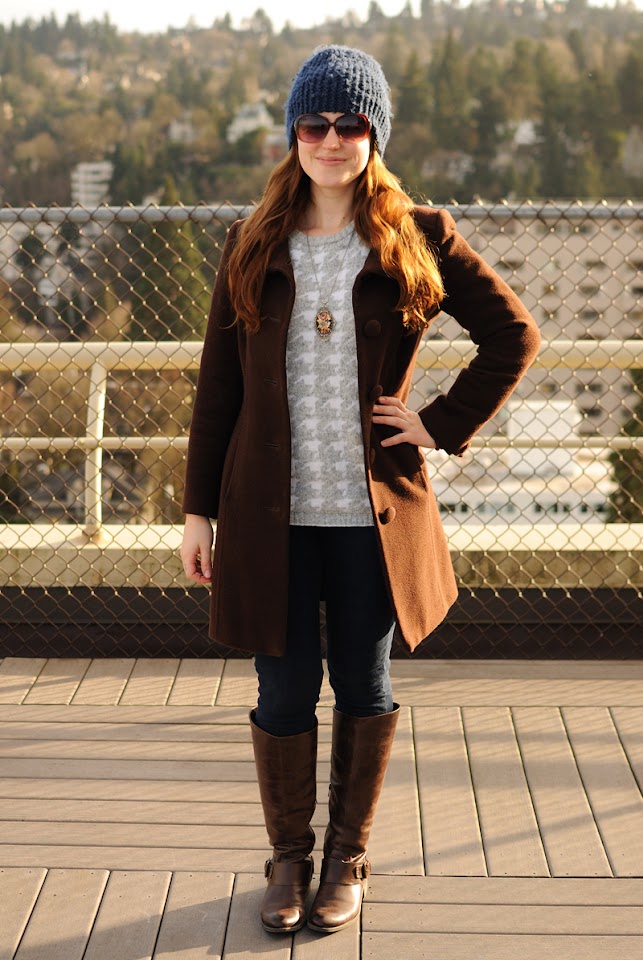 It's been so cold here lately, so I've been wearing a lot of bulky, cozy sweaters. I love this gray sweater that my aunt gave me. She found it when she was cleaning out her apartment. I think it's from the 80's. It was more obviously 80's before I cut out the shoulder pads, but now I think it looks quite cute. One of my other aunts gave me this necklace. I get so much free stuff from my three aunts, it's ridiculous. Right now I especially appreciate their hand-me-downs, because I'm banned from buying clothes. Josh and I are trying to kill off the rest of our non-student loan debt, so for the next few months I have a clothing budget of $0. So far I've gone a month and a half without buying any clothes, and it's been rough. I don't think I've gone that long without buying clothes for years. I think my no shopping challenge will be good for both our budget, and my frame of mind when it comes to shopping. I don't need to be constantly buying things in order to have a good wardrobe. 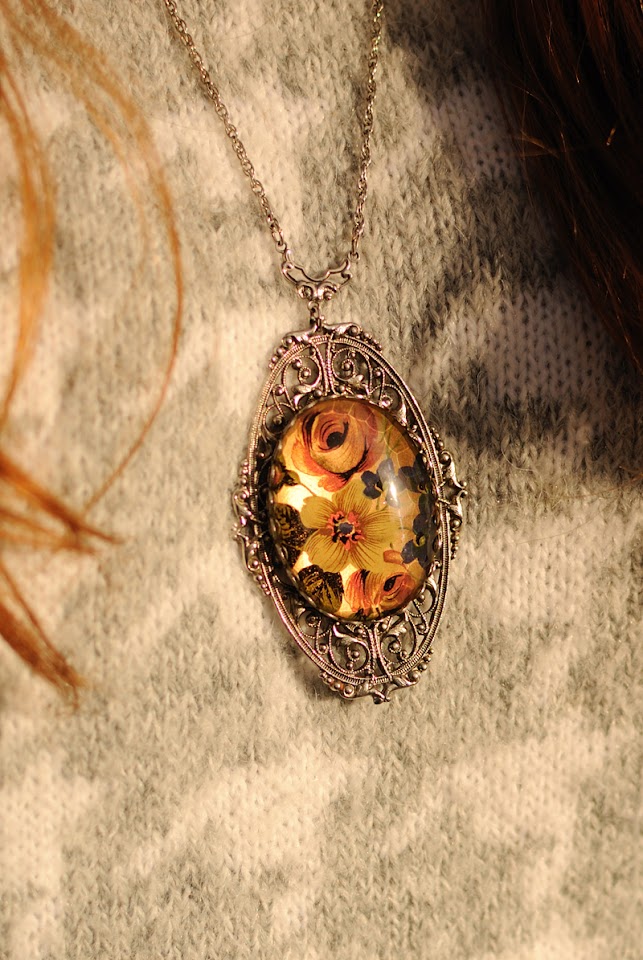 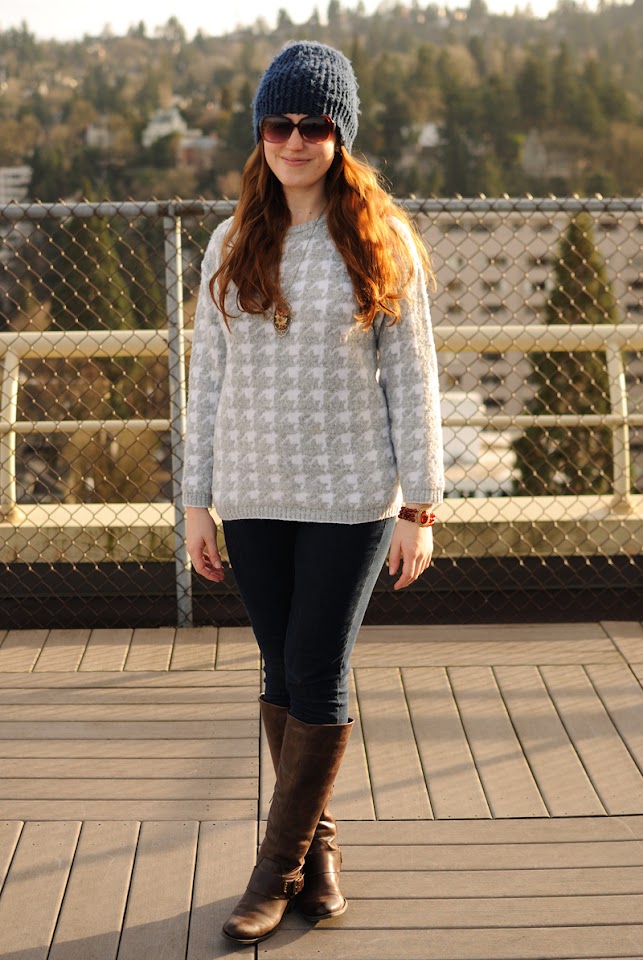 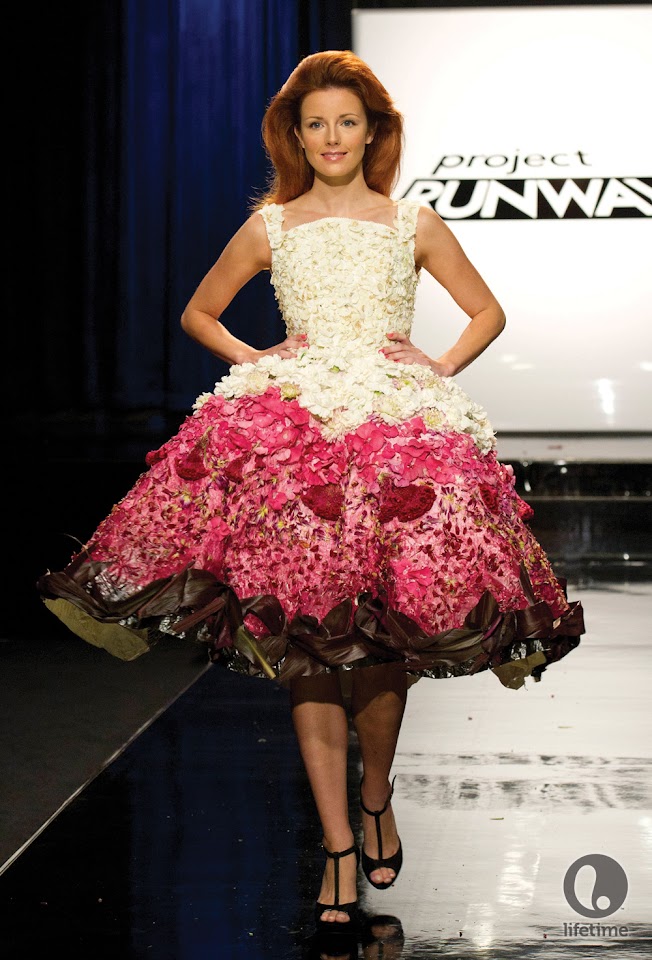 All photos from this source

I watched last week's episode of Project Runway last night. If you don't watch that show, I would highly recommend it - it's the only "reality" show I can handle. I love the clothes, I love the snark, I love the drama. Last week's episode was the unconventional materials challenge, which is always my favorite. The contestants are sent to an unusual store to buy the supplies for their outfits - grocery store, pet store, candy store. This time they went to a flower store and hardware store. I loved the results so much that I thought I'd share some of my favorites. (As well as the one I hated, because, well, why not?) Also, I had no outfit photos to share, so there's that reason, too :)

I love Kate's dress (pictured above) because it's so frou frou and over the top. Michelle and Richard's dress, below, is kind of bondage-meets-salad, which is weird and very interesting... 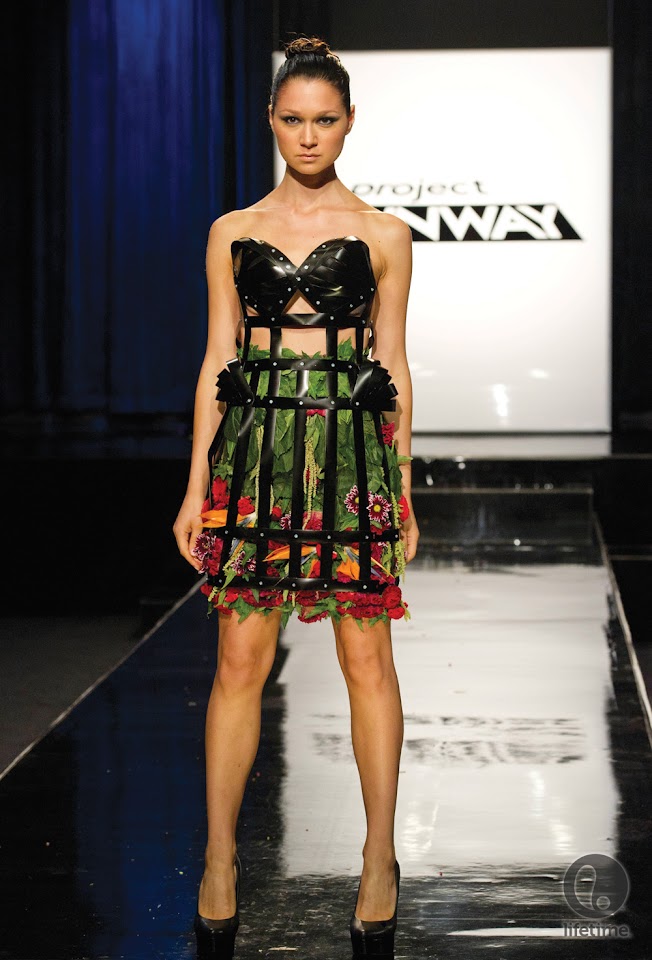 The next two dresses I only liked the backs of. I love the asymmetrical string straps and ombré flower petals on Benjamin's dress, and the exposed hardware on Amanda's... 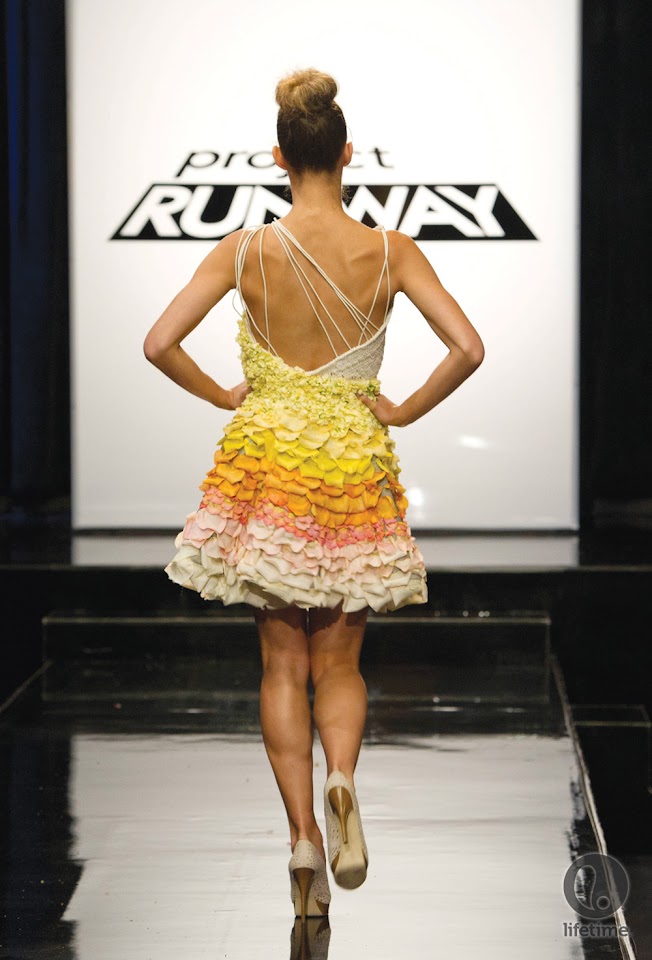 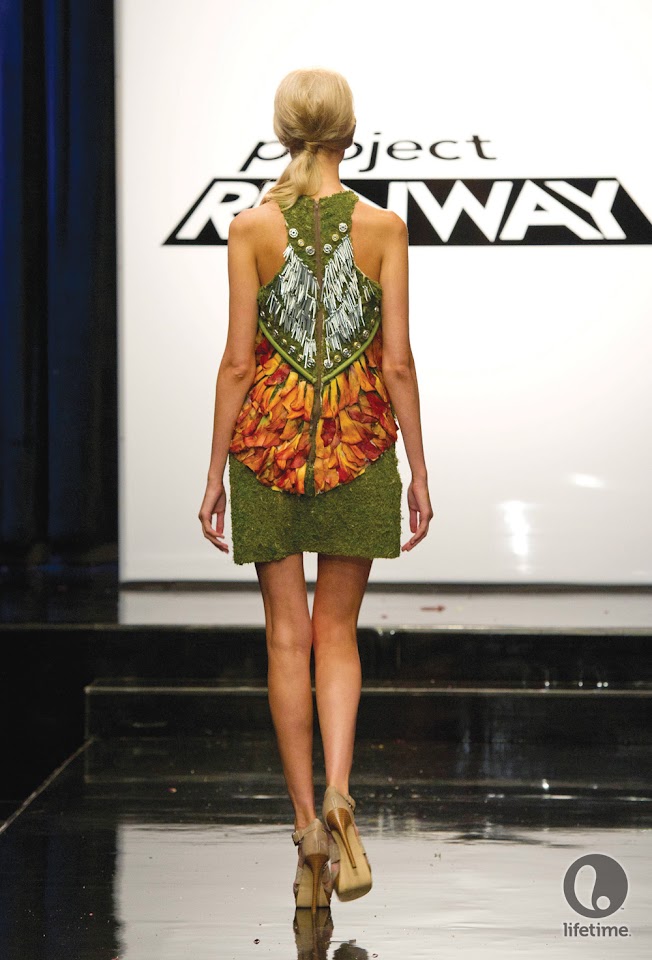 Patricia's outfit was the one I absolutely loathed. I thought it was hideous and nonsensical, and I feel fairly certain that even though I am not crafty, I could have made something similar in a day and a half... 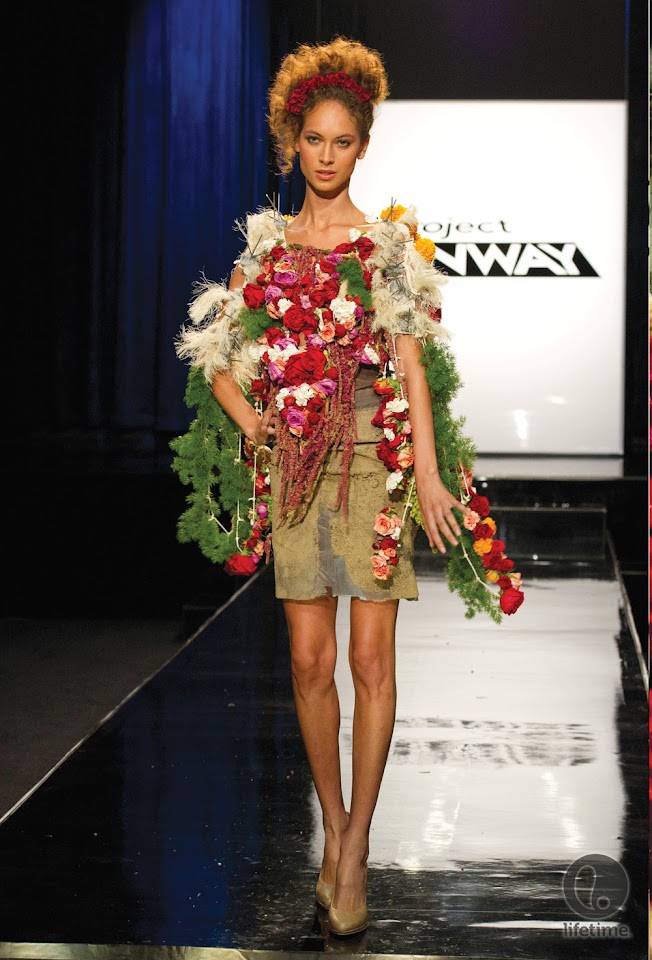 My favorite dress was Layana's - I think it's a work of art, and I could definitely picture someone wearing it on the red carpet.... 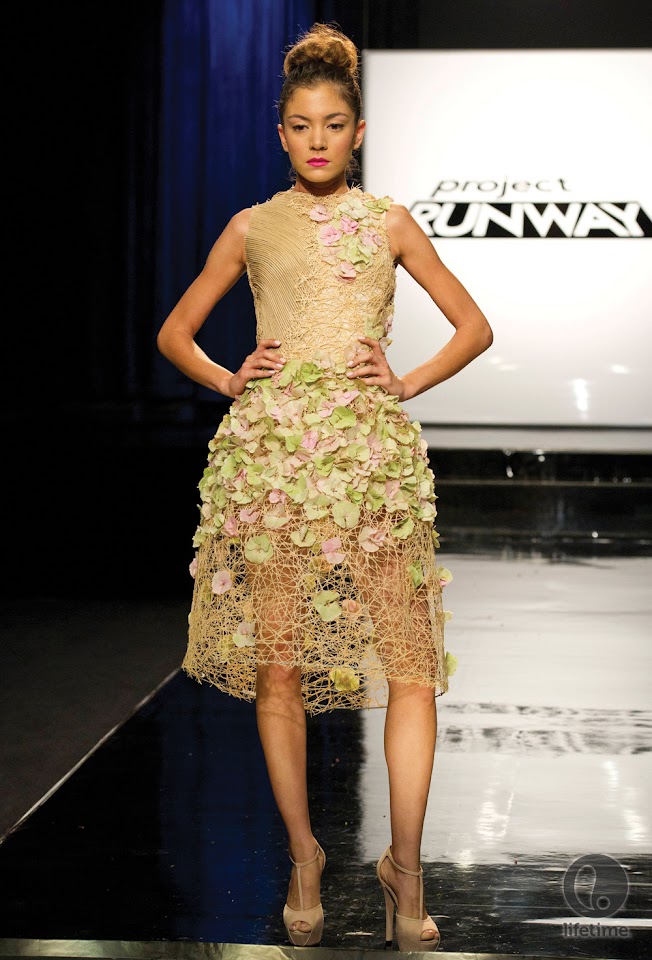 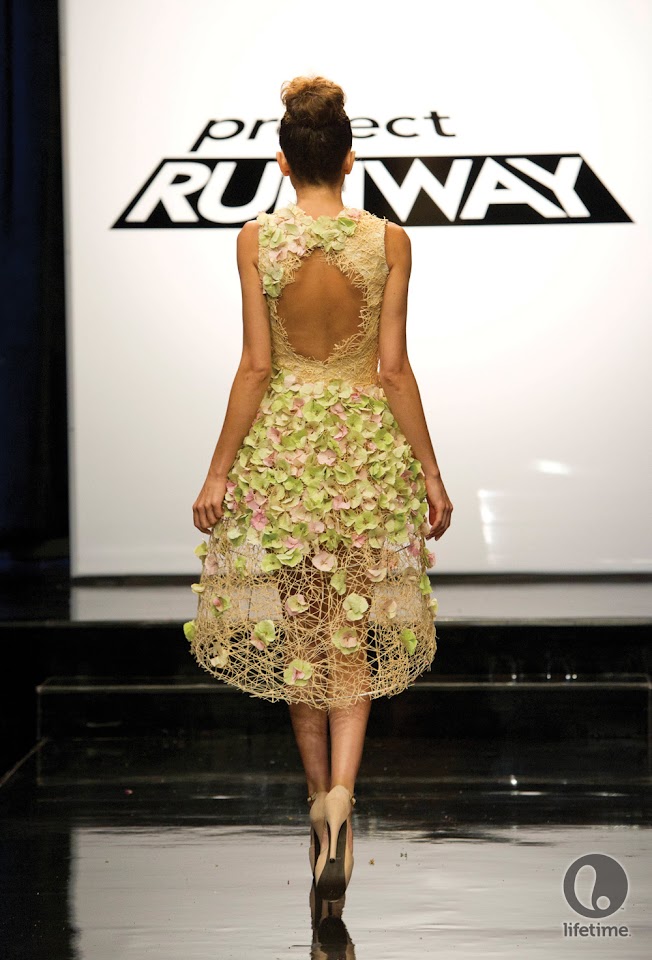 Do any of you watch Project Runway? I'm sad that Michael Kors isn't one of the judges this season. I miss his particular brand of brilliant, witty snark. And I feel like all the contestants are being too nice to each other with this team challenge. I miss the days of people yelling at each other and calling each other names behind their backs.
4 comments: 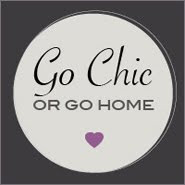